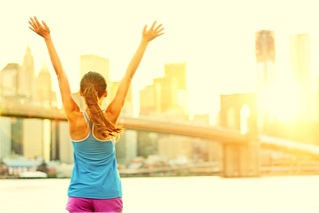 Let’s Hear it for Endorphins!!!

As mere humans, we have all experienced emotional challenges. Sadness, depression, despair, fear, and stress are all an unavoidable part of life. Although normal, these emotional swings can vary in extremity and can have serious affects on physical health. Whether sad or angry, a person’s brain chemistry is affected. The imbalances that occur by the change in the brain’s chemistry can cause a rise in blood pressure and blood sugar due to the stress of the emotional state. Blood chemistries can fall out of balance, which include sodium and potassium. These disturbances can lead to temporary and long term illness. Some external symptoms of these changes are fatigue, forgetfulness, listlessness, lack of motivation, despair and discouragement. Of course many cases of depression are very serious and can require more extensive treatments but often the road to relief can start with something as simple as exercise!

When you exercise, your body releases chemicals called endorphins. These endorphins interact with the receptors in your brain that reduce your perception of pain. Endorphins also trigger a positive feeling in the body. For example, the feeling that follows a run or workout is often described as “euphoric.” That feeling, known as a “runner’s high,” can be accompanied by a positive and energizing outlook on life.

Endorphins act as analgesics and sedatives, which means they diminish the perception of pain and anxiety. They are manufactured in your brain, spinal cord, and many other parts of your body and are released in response to brain chemicals called neurotransmitters. The neuron receptors the endorphins bind to are the same ones that bind with some pain medicines. However, unlike medication, the activation of these receptors by the body’s endorphins does not lead to addiction or dependence and the side effects include a happier person with a better physique!

It’s important to remember that not everyone has the same fitness abilities. If you are just starting an exercise routine for the first time or haven’t been active for a while, you should choose a safe but effective program that is somewhat challenging but not discouraging. Consult a fitness professional to get you started to avoid injuries. Once you find what works for you, the improvements in overall health will be noticeable and addictive! Be Well, Be Fit, Be Happy!!!

Copyright © 2014 B Well B Fit B Happy. All rights reserved